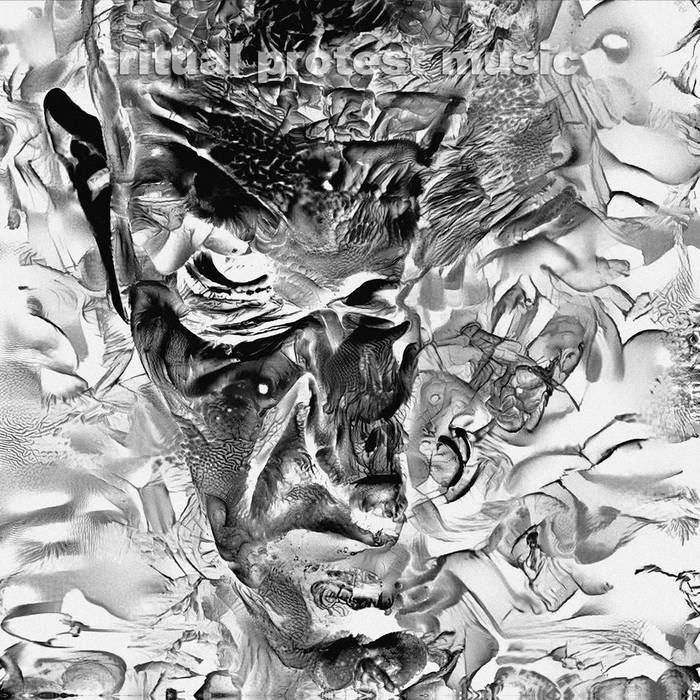 "Ritual Protest Music" picks up where "Rise" (album from 2017) left off, politically charged, hyperreal and unremitting soundscapes containing harsh social and self-criticism clad in a sense of impending doom spiced with an energizing optimism and informed by faith in the humanimal. A poignant reminder of humanity's position on this planet, the tension on this album is expressed solely through sound and "lyrics" (as opposed to the extensive liner-notes that accompanied "Rise"), impliying a necessary shift from a rationalised perception of life to one
of a sentient, a part of a whole, as suggested by DP's "humanimalism" concept.
"Clearing" a 4 track mini-album was released on lathe-cut 10” in an edition of 50, continues this path, and also is possibly DP's most “song”-oriented work to date. The bonus track was composed at the same time as "Ritual Protest Music" and originally released on Moscow label Mikroton.

Protest music?
But what protest?
In DP's words:
“What I protest against is the restriction and reduction of life. Of all life! The restriction of knowledge to rationality. The reduction of perceiving to thinking. The reduction of beings to objects, to food, or to lives to be
exploited. The restriction of humans to problems locked out at borders. The restriction of our interesting differences to categorical & simplistic identification patterns such as nationality or religion. or the restrictions
called national borders, that inevitably lead to mental borders, mental restrictions and self-restriction. The reduction of people to labour or consumers. The reduction of nature to a resource that is just there to be used. The reduction of the human potential via public educational systems to conditioned automatons. the restriction of the i as a being without interest in knowledge or growth of self, as binary beings that just compute and consume or otherwise sleep, as the
(western) market and media suggest. the reduction of produce, or energy, or lives, to waste. all this waste....
i question these standards & values, they make me feel uncomfortable. i cannot agree with these
restrictions, with this waste. but i am a part of it.
so a lot of my criticism comes from self-reflection. i have to deal with the mind and world i live in. and i want
to as well, learning is exciting, it makes sense, and pain is a good teacher. so my sound takes on the form
of, for lack of better words, a kind of expelling, a purge, a healing, a ritual, where 'negative/energydepleting/restrictive' objects, subjects and topics are addressed in order for them to be expelled.
my work might touch on topics such as animal rights, human rights and environmental awareness and
sensitization, but actually it’s the interconnectivity or hyperconnectivity (some call it chaos) between all these
things that interests me - for example, how these topics relate to the idea of domination or to supremacy and hierarchical thinking, or to dualism (and binary dominance) or to the economic mindset, which, in my view, is one of the main destructive forces of our day and age. profit has become more important than life. My work talks about this disrespect. my work engages itself for respect. and for engagement.